Shares of Chinese electric-vehicle maker NIO (NYSE:NIO) were trading higher on Thursday after the company said that it had hit a key production milestone. As of 12:25 p.m. EDT, NIO’s American depositary shares were up by about 10.6% from Wednesday’s closing price.

NIO said that its 5,000th vehicle of the month rolled off the production line on Thursday, marking the first time that the company has manufactured more than 5,000 vehicles in one month. The achievement comes after the automaker made some upgrades to its production line during the third quarter. 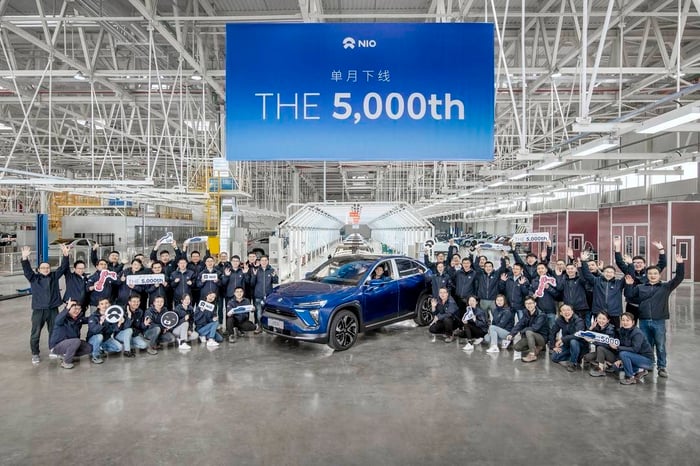 NIO doesn’t yet have a factory of its own; its vehicles are built under contract by Anhui Jianghuai Automobile Group (often referred to as JAC Motors) in a factory near NIO’s new headquarters in Hefei, the capital of China’s Anhui province. NIO has a dedicated production line in JAC’s Hefei plant; its engineers worked with JAC to increase production ahead of the launch of NIO’s third model, the EC6 crossover, in September.

NIO delivered 4,708 vehicles to customers in September, its best-ever monthly total — but it appears likely that record will be broken shortly. That’s why NIO’s stock is trading higher Thursday.

Auto sector investors‘ eyes will turn to NIO again when the company reports its third-quarter results, likely in mid-November. Sales were strong in the quarter, and I expect earnings will be strong as well — but what investors will be most looking forward to is an update on the company’s growth plans, including details about its next new model, which is due early in 2021.

NFL schedule Week 4: What games are on today? TV channels,...