Zeta, now downgraded to a post-tropical cyclone, continued to lash portions of the eastern U.S. Thursday with heavy rain and high winds as the potent system made its way out to sea.

The storm, which made landfall as a Category 2 hurricane Wednesday afternoon, knocked out power to more than 2.6 million homes and businesses and has been blamed for at least six deaths in the South.

Zeta ripped off roofs, knocked down power lines and trees and flooded streets as it roared through Mississippi, Alabama and Georgia early Thursday, the Weather Channel said. Heavy rain and winds also pounded eastern Tennessee and the Carolinas.

Power outages from the storm also affected polling places in some areas, including northern Georgia. State officials weren’t sure how many of the 336 early voting locations statewide were closed or delayed in opening. In Douglas County, in Atlanta’s western suburbs, all six polling locations were without power, as were county offices.

Voting was also affected by the storm in portions of Alabama, Mississippi and Florida. 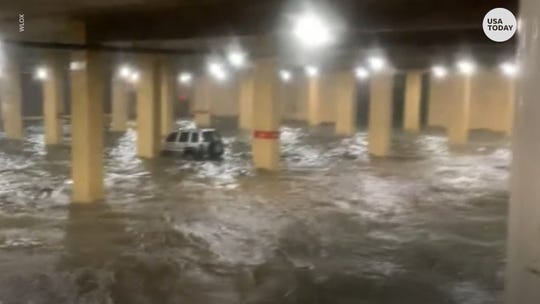 The storm was a ferocious hit for some along the Gulf Coast. In Waveland, Mississippi, on the state’s coast, the town’s mayor, Mike Smith, told WLOX-TV that the town may have suffered its worst storm damage since Katrina blasted the city in 2005.

“We’re really getting beat. We’re looking at wind over 100 (mph) for sure,” Grand Isle Mayor David Camardelle said in an interview with WDSU as Zeta’s eyewall moved over the island.

Zeta is the 27th named storm of a historically busy Atlantic hurricane season, which still has more than a month left. It was the 11th tropical storm or hurricane to hit the United States this year, marking an all-time record high for the country.

Forecasters also were monitoring an area of disturbed weather in the Caribbean, one that could develop into a tropical depression or storm over the weekend or early next week, the Hurricane Center said.

NFL schedule Week 4: What games are on today? TV channels,...